It is everything to do with how enterprises, marketing, media, communication & technology professionals have to reengineer themselves to the new emerging customer controlled economy.

The Wired 40 - Most innovative companies in the world

Wired has released the annual list of most innovative companies in the world.  Apart from the Googles, Apples and the like, to me the list has some interesting trends of how customer-focussed innovation is going to be key for survival and growth of companies around the world.

Here are key innovation trends that I picked-up which are going to have significant impact on our society and culture:

Take a look at some of the companies in this list:

Medtronic has moved up one place in the list. What do they do? They make chest implants that transmits vital signs to the Web for your cardiologist to view. Clearly to me, it is the starting of converting pharma/medical products into a customer services business.

Sunpower is in the business of "green energy". Again an extremely customer-focussed utilities business where they are using solar energy for residential and commercial applications. They have moved-up 4 places in the rankings.

Level 3 - If internet video and  web 2.0 are reshaping our lives, bandwidth and data pipes are key catalysts to this change. Level 3 boasts of 50,000 miles of net backbone. Companies that carry and convert this data into information in real time will be in demand. Level 3 is new to this list!

Nvidia and Nintendo  are in this list too. Gaming and gaming related business seem to be a key innovation trend that is catching-on. As more and more consumers get addicted or introduced to gaming or as gaming becomes an integral part of our lives, more and more brands need to understand how to leverage this new G-culture. In fact, Nvidia moves-up 11 places and Nintendo is new to this list!

Salesforce.com moves-up 8 places. Clearly, it seems SAAS(Software As A Service model) is here to stay. It's no more just about building great software products but the business model of making it available to millions over the web on an access fee basis is going to be key.

Comcast, NTT Do Co Mo, Verizon are players who are changing the landscape of entertainment and mobile communications. They are driving on-demand internet based entertainment and building new digital lifestyle infrastructure.

It's a first, however, for General Electric's health-care unit, which sells $15 billion a year worth of clunky X-ray machines, CAT-scan machines, and ultrasound testing equipment. The health-care division has long been a technology innovator. But it has historically tried to differentiate its products by getting better and faster readings from its instruments—"feeds and speeds" as Lou Lenzi, the general manager of global design at GE Healthcare, puts it. So turning to art school students for ideas is a significant departure.

GE wants to make medical tests easier on both the patients and the operators of the equipment, which means focusing on the human side of the equation, from ergonomics to emotions. How, for instance, could a traditionally monstrous CAT scan machine be designed to seem less ominous to patients already distressed by their medical condition? How could a machine be easier for the technician to use?

There were other forces at work, too. One of GE Chief Executive Officer Jeffrey Immelt's initiatives has been to call on employees to "Go Big" by targeting large markets and ideas that might pay off in outsized ways. With that in mind, the health-care designers asked the Art Center students to look at how the company's services might be delivered in developing nations 20 years from now.

Am I on a clinical trial?

I read this absolutely shocking article in Wired where it talks about India's poor consumers and how she is a low cost destination for doing clinical trials. It also goes on to mention  how Indian legal systems are lax and that pharma companies even take advantage, if tests fail(read people dying!!) due to lack of proper legal processes!

Here are some excerpts from the article:

By 2010, total spending on outsourcing clinical trials to India could top $2 billion, according to Ashish Singh, vice president of Bain & Co., a consulting firm that reports on the health-care industry.

According to a 2004 study by Rabo India Finance, a subsidiary of the Netherlands-based Rabo Bank, clinical trials account for more than 40 percent of drug-development costs. The study also found that performing the studies in India can bring the price down by about 60 percent.

In 2004, two India-based pharmaceutical companies, Shantha Biotech in Hyderabad and Biocon in Bangalore, came under scrutiny for conducting illegal clinical trials that led to eight deaths.

In another incident, Sun Pharmaceuticals convinced doctors to prescribe Letrozole, a breast cancer drug, to more than 400 women as a fertility treatment in a covert clinical trial -- and used the results to promote the drug for the unapproved use. Pfizer, Eli Lily, Novo Nordisk, Glaxo Smithkline have been conducting clinical trials in India for many years ....

I have always felt the medical systems in India are never above board. Patient ignorance is always taken for granted and abused by doctors. Many a times, I have felt that I am being asked to take tests when it is not needed or am given a prescription which includes certain drugs or tablets which may not be necessary. I normally don't trust these doctors, as I am left with a feeling that they are working hand-in-glove with pharma companies or pathology clinics. It is a well-known fact that these companies use PR, doctors and the goverments to manipulate healthcare.  Hospitals too, have joined the bandwagon and some of the well-known hospital groups don't have any ethical standards.The consumers are left suffering in the bargain.

So, when I see a marketing initiative by pharma companies, I rarely trust them at all. Today, we have a heart day, diabetic day, cancer day to name a few in India. The pharma companies have a lot to do, to gain the trust of consumers. I think the doctor-pharma companies nexus needs to be broken. We need to have a second-opinion physicians network , who can help consumers analyse whether their doctors are doing the right thing and then get into treatment. This must become mandatory. A new company neutral advisory platform is necessary. May be an equivalent of wiki for medical advice is needed.

Else, I will always feel, am on a clinical trial! 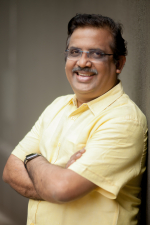