It is everything to do with how enterprises, marketing, media, communication & technology professionals have to reengineer themselves to the new emerging customer controlled economy.

Airtel's India's first mobile app centre- A case for Open Apps - Did they miss a trick or two here!

Airtel in India launched a massive advertising campaign today for their India's first Mobile Application centre today. It has been in a soft launch mode for some time( 4 months) and Airtel claims there have been over 13 million downloads, over 71,000 apps and compatibility of these apps with over 780 devices. 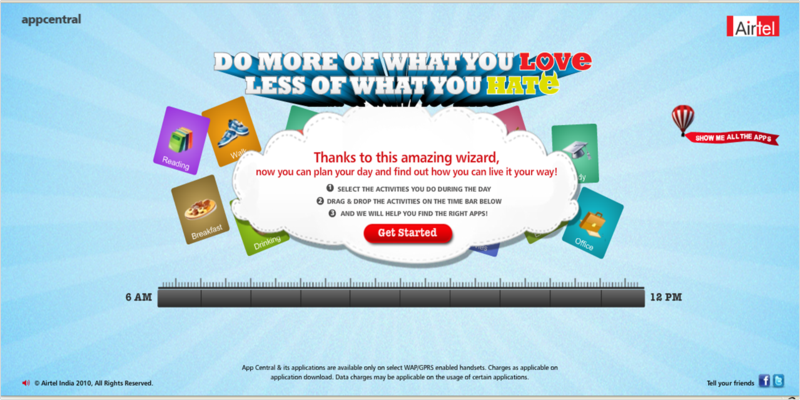 Airtel is looking at this  App centre as a huge value-addition to their current customers.

How do consumers benefit?

The questions really for me are as follows for a mobile phone service provider w.r.t to Mobile Apps:

I am strong advocate of Open- Apps especially for Mobile Phone service provides and even device providers. The walled gardens need to break down. In fact, opengardens one of the top 10 mobile blogs do believe this trend is coming soon.

Imagine what OPEN-APPS, could have done to Airtel:

Netflix Queues - The power of visualization of data & preferences

Tim O' Reilly tweeted about an interesting interactive feature on NY Times on using the popular movies rented data on Netflix by neighborhoods and zipcodes in the US! It's a lovely little application that tells movies marketers the kind of preferences consumers have had in 2009. 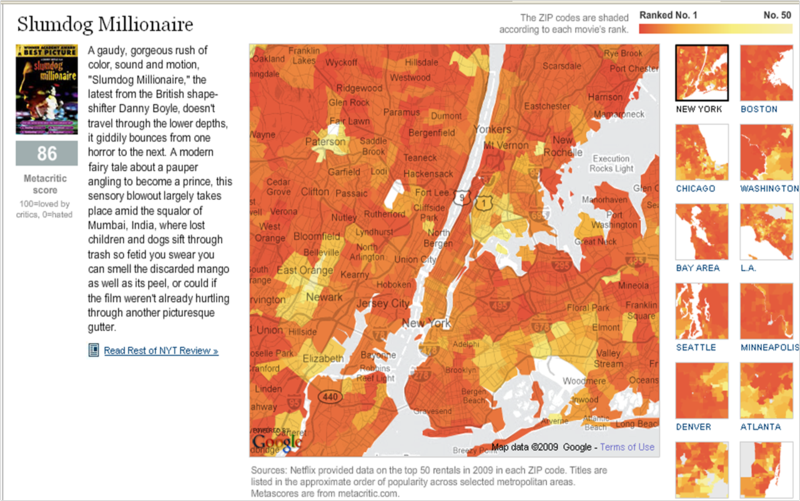 This made me reflect on the infinite opportunities that are available on how data can be used in a number of ways imaginatively. Imagine the interesting applications of data:

The next decade is all about the imaginative use of data that's available with companies & visualization of the same, across offline and online media to get consumers to start interesting conversations amongst themselves.Brands that are able to leverage this trend will build stronger engagement with their customers.

Tom Asacker writes about the fact that great marketing is all about brilliant story telling. In my view, it is extremely true. Just go back and think about the companies, products or brands that you remember. You will have a great story to tell. It could be an interaction, a product experience or even some small incident that caught your attention. Take a look at what Tom has to say and the key question that you should ask yourself, when you are marketing your brand is -"Do I have a great story to tell?"

Great marketing is great storytelling. All great religions are sold via storytelling, or parables as they are often called in Christianity. This is a good strategy; people are inherently interested in stories, whether in films or novels or, even, brands. The problem is that the stories often go untold. If you're still a skeptic, let me tell you some amazing stories you've never heard about some very well-known companies and brands. Let's start with the world's largest company.

Wal-Mart: Founded by Sam Walton in 1945, this company now has 1.3 million employees and is the largest retailer in the world. While everyone knows about its low prices, very few know the story behind them. To deliver these prices, the company uses some amazing technology and computer systems. It encourages suppliers to shrink package size to reduce shipping weight to save money; it buys local produce to avoid transportation costs. Sam's Club buys coffee directly from growers to avoid costly middlemen. The company works hard to save people money, but it's a story never told.

Southwest Airlines: Herb Kelleher set out to launch a different kind of airline. He flew out of secondary airports as a way to avoid costly hubs. He flew point to point so his customers didn't have to change planes. He flew only one kind of airplane to reduce training and maintenance costs. He decided not to have expensive, lousy food. This saved money so customers could go to a better restaurant when they arrive at their destination. He replaced costly reservations systems with re-usable boarding passes. Herb turned the airline industry upside down, but it's a story never told.

SKF: This is a 100-year-old Swedish company that has quietly made an enormous difference in the way the world runs. Year after year, it has come up with new innovations in its family of bearings, large and small. Its basic technology can be summed up in a simple motto: "Making things run better." Efficient machines use less energy than inefficient machines, and SKF's innovation has made it the world's leader in bearings. It's a story never told.

Betty Crocker: This is a lady you'll still find in spirit out at General Mills, working in her kitchens. Years and years of recipes, cake mixes and prepared food of all kinds have emerged from these kitchens. (You can even have a kitchen tour if you want.) Betty has forgotten more than Martha Stewart ever knew about cooking. It's a story never told.

Papa John's: Not that many years ago John Schnatter was making pizza in his uncle's store. He was buying his pizza sauce from Dino Cortopassi, the gentleman that supplied sauce to most of America's small, independent pizza restaurants. Since many were Italian, they appreciated Dino's real Italian fresh-packed sauce. Since there was a limit to how much sauce he could pack, he didn't sell to the big chains. But John decided to become a big chain and Dino kept selling him his sauce. Meanwhile, the big chains continued to re-manufacture sauce from concentrate. That sauce is the cornerstone to John's motto: "Better ingredients. Better pizza." It's a story never told.

Continuing with my thinking on this topic, NY Times has interesting article that further reinforces this thought:

Behind the shift is a fundamental change in Nike’s view of the role of advertising. No longer are ads primarily meant to grab a person’s attention while they’re trying to do something else — like reading an article. Nike executives say that much of the company’s future advertising spending will take the form of services for consumers, like workout advice, online communities and local sports competitions.

“We want to find a way to enhance the experience and services, rather than looking for a way to interrupt people from getting to where they want to go,” said Stefan Olander, global director for brand connections at Nike. “How can we provide a service that the consumer goes, ‘Wow, you really made this easier for me’?”

Traditionally, the “service” provided by advertising was cheaper media content for consumers. But the services of the future may be virtual workout coaches, map applications for cellphones, health advice and matchmaking services.

I think this kind of content fused with enriched data( on what customers use as a service, which will arise out this content) will drive the future of marketing.

I just love this thought by John Jantsch on how marketing today is all about content.  I can't agree with him more. Marketing is no more about messages, no more about offers, no more pushy about sales messages. It's transforming into a world of content. That's really what consumers want to read, enjoy and absorb.

While he has focussed on small business and their needs, I think there is a bigger thought for even large companies.

If you have a product, find out what content can you create around it?

He talks about the concept of creating mixed media content and how businesses need to adapt to provide such content to their prospects. He writes" Now when a surfer goes to a search engine looking for content they may find local directory results, images and video mixed into the organic results. If you aren't producing these types of content you may find it tougher to compete."

To me again, this is just not restricted to the web. It's applicable to every form of media - TV, Radio, DM, E-mail, telemarketing etc.

Next time , if you don't have content around your product, don't start marketing!!